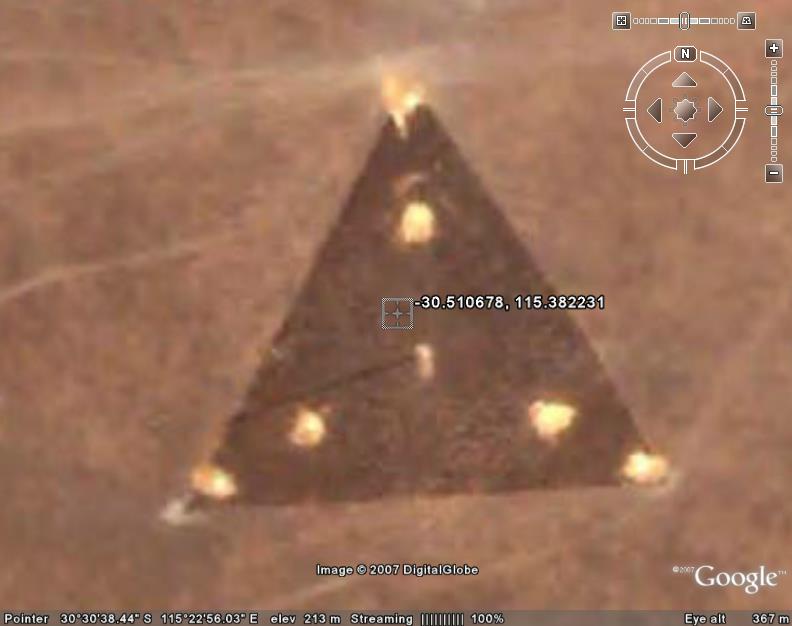 Is it a structure, discoloured earth, ‘land art’ or one of the legendary flying triangles seen around the world for the past two decades or so?

From The Why Files:

“There has been some talk of the construction of a U.S. base in Western Australia near the town of Geraldton. Take a look at Coordinates 30°30′38.44″S 115°22′56.03″E on Google Earth and you will discover a triangular-shaped image. It doesn’t appear to be a craft or even a building and it could, of course, just be a filling image in a situation where the original Google image was not useable.”

One poster estimates the object, if it is an object, to be 360ft across, which would tally with guesstimates made by flying triangle witnesses on the ground, who habitually refer to them as being “football pitch sized.”

ON a sobering note, the Wikipedia entry for flying triangles notes: ” The director of NUFORC, Peter B. Davenport, claimed that the object was a radio tower: It is a radio tower. You can see the shadow of the tower at the “8:30″ position”

“I don’t see it as a “triangular craft sitting on the ground”, I see it as a cleared patch of the desert about 110 m on a side, associated with some structure, possibly a tall mast with a tripod of cable stays.

There’s a dark line running away from the centre.

If you go a mile or so north (staying inside the same image tile) there are some low buildings which show the shadow direction – this looks to me to be consistent with the dark line being a shadow of a tall mast.

I think perhaps the bright spots that look like “lights” but are actually about 20 ft across or more are disturbed areas where the light subsoil has been exposed in excavation to anchor the mast and the stays.

There are other patches around the area that look like quarries etc., that have the same bright colouring. That probably suggests a new installation, which would fit if it were connected to that new “super secret spy base” mentioned as being constructed nearby.”