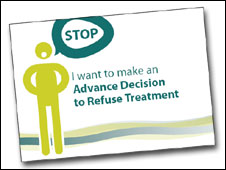 ‘Available in pubs, banks, libraries, GP surgeries, even some churches, the Advanced Decision to Refuse Treatment (ADRT) card sits snugly in a wallet or purse and instructs a doctor to withhold treatment should the carrier lose the capacity to make decisions, because of an accident or illness.

Dubbed the “right-to-die card”, it’s being seen by some as a short-cut to euthanasia. But its backers say it is a practical way of implementing the Mental Capacity Act, which came into force in 2007.

The act allows adults to draw up “advance directives” stating what sort of treatment they don’t want should they lose capacity. They build on the principle of “living wills” but, crucially, mean that doctors are legally bound to abide by a patient’s wish to refuse life-sustaining treatment.’

Hmm, think I’ll keep mine next to Stewart Home’s Necrocard