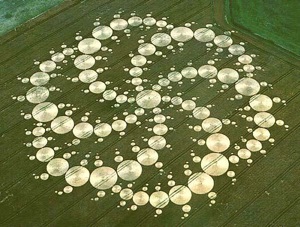 Crop Circle season is almost upon us. Plans are being drawn, fences are being strengthened, black boxes are being turned on to check that the blinky lights still work.

Over at Boing Boing Jacques Vallée, the brilliant French computer scientist and UFO researcher, has posted a sanguine riposte to the hostility he receieved from an earlier post, in which he suggested that some crop circles were produced by the military using lasers mounted on satellites or other aerial platforms:

The specific hypothesis offered–that crop circles are the result of a U.K. defense electronics development project–only elicited 19 responses discussing the facts or arguing for or against the idea itself. Among the other 40 responses … 15 asserted their authors’ strongly-held pre-existing belief … 14 simply expressed a flat rejection with no arguments, and fully 11 responses can only be described as cyber-bullying…. What does that say for the ability of new web-based media to support intelligent debate on controversial scientific issues, censored or strongly discouraged in the scientific environment? 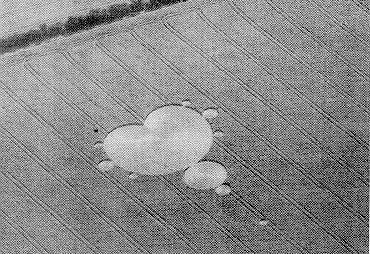 The formation that I believe Jacques was originally referring to is the Mandlebrot Set that appeared on 11 August 1991 in a field at Ickleton, about 11 miles south of Cambridge (pictured above). There are of course lots of mathematicians in Cambridge but, as far as I’m aware, the identity of the team behind this iconic image remains unknown. Contrary to what many circle enthusiasts believe, most veteran circlemakers know who made what, or at least have a good idea who did, so such anonymity is quite uncommon in the field.

In 2006 Field Guide authors Rob Irving and John Lundberg were asked to recreate the Mandlebrot formation for the BBC. They found the job surprisingly challenging, though they did manage to complete it working in rather adverse weather conditions. While the anonymity of the original authors certainly leaves the glowing window of outrageous possibility open a crack, I don’t think that crack is big enough to squeeze a defence satellite, or even a drone, through.

The laser calibration theory, originally proposed in 1990 by another French ufologist, Jean Jacques Valesco, is a novel and, for the time, reasonable one. But, as a former crop-circle maker, I don’t think it’s necessary to resort to advanced technologies to account for any crop formation. If lasers have been used to make some crop circles, and they have been, then they were the sort that you can buy in terrestrial hardware shops, or on the Internet (as always, see The Field Guide for a full run down of crop circle making technology).

Thanks to John and Rob we know that the Mandlebrot formation can be made in the pissing rain by just two experienced crop circle makers, even if it’s not easy. So, from my fringe-dweller’s perspective I’d put my money on mischievous mathematicians as the source of the 1991 formation  – they’re much cheaper to run than satellite lasers. And besides, if our military was going to make a crop circle, I imagine it would look more like this.