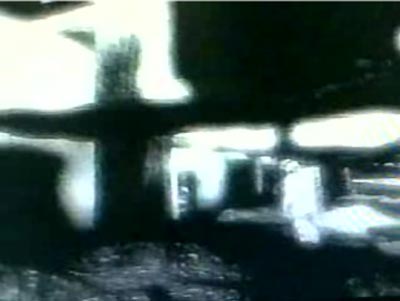 In honour of mankind’s first moonwalk 40 years ago I’m reposting this wonderful footage. ..

This film shows the remains of ancient alien structures on our Moon, filmed by Neil Armstrong and Buzz Aldrin on mankind’s first visit there in 1969. Perhaps this is why NASA ‘lost’ the original footage from this trip.

Whatever it actually shows, the film is quite beautiful, like a German expressionist cross between HP Lovecraft’s At the Mountains of Madness and HG Wells’ First Men in the Moon. In the above shot, the overwhelmed astronaut just hangs there aghast at the wonders that surround him.

To my mind the final shots are a little disappointing – they look a little too much like a front room window in an adobe-style New Mexico home! – but this is great stuff. Allegedly there are ten more minutes of it out there… let’s see the rest.