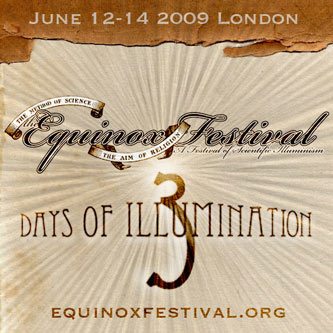 Strange Attractor is excited to be involved with the first Equinox Festival, to be held in London’s Conway Hall (site of our own Megalithomania event in 2002) on June 12-14 2009.

Equinox is currently hosting 13 bands, 12 speakers and 10 films, all drawn together by their diverse but dedicated explorations of esoteric themes, traditions and ideas.

There’s too much good material to list it all here, but highlights include:

* The first UK performance in 35 years of acid-folk legends Comus. The original band will perform their bizarre and beguiling album First Utterance in full, in what is sure to become a sell-out concert.

* Films to be screened include work about Maya Deren, Alan Moore and Harry Smith and by Alejandro Jodorowsky and Craig Baldwin.

Strange Attractor has been acting as a consultant on the festival, and will publish an accompanying book of essays and artwork that doubles as a festival programme. More details on this are to follow, but a special edition will be made available.

We’ll have further updates on the Equinox as they come in. Watch this space and see you there!