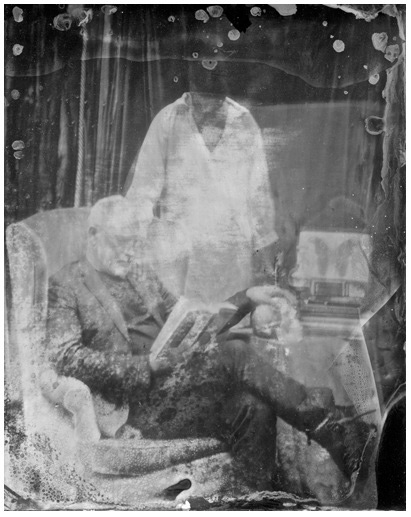 Robert Williams: Dis Manibus
A taxonomy of ghosts and ghostly phenomena.
The name Dis Manibus is drawn from the Latin, abbreviated to “DM” on Roman tombstones, which dedicate the occupants to ‘The Spirits of the Underworld’. Dis Manibus emerged as a consequence of a series of seminars at the noted Mildred’s Lane Project in Pennsylvania. Here, over an intensive three-week period, a group of graduate students and artists referred to as Mildred’s Lane Fellows considered the different contexts and behaviours of ghosts and ghost-seeing from a range of popular cultural forms.

Roger Luckhurst – Voids, Corridors, Wires
Haunting has recalibrated to the spaces and networks of the modern world, its architecture and environments. These are spaces that do not seep history as much as horrify through their absences and psychic deficits. This talk will start to build a taxonomy of contemporary haunted spaces, featuring appearances from Kipling and Ballard, Kubrick and Lynch.

Roger Luckhurst is professor of modern and contemporary literature at Birkbeck College, University of London. His most recent book is The Mummy’s Curse: The True History of a Dark Fantasy.