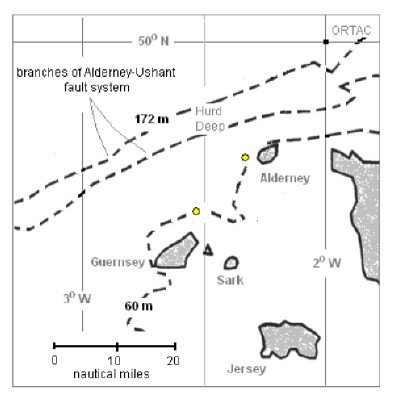 This year’s Chinese lantern, sorry UFO, flap has revealed the phenomenon – and by that I mean the entire phenomenal feedback loop from the event itself through to its dissemination and amplification via the media – at its most revealing and least inspiring.

So it’s a great relief to see this fantastic piece of investigative work starting to make its way around the web.

The sighting last April of something by pilot Ray Bowyer near Guernsey spawned a rash of speculation about ‘mile-long’ spacecraft, though the reality of the situation was best reflected by the attitude of the UK MOD to this apparent intrusion into European airspace. The MOD declined to investigate, stating that the incident technically took place in French airspace and was, effectively, France’s problem.

Clearly not too worried about an imminent alien invasion then.

This report demonstrates a very good reason why they might have wanted to pass the buck. An immense amount of time-consuming research and tedious data crunching has gone into it, while the authors’ conclusions are nothing short of, well, ambiguous, with barely a hint of a physical object to be seen. As such the report is sure to be of little or no interest to the majority of the mainstream UFO community.

“We are unable to explain the UAP sightings satisfactorily without either a) discounting at least some significant features of the reports, or b) doing violence to at least some conventional meteorological optics or conventional EQL phenomenology. We hope that readers of this report will find it helpful in deciding which (if either) of those courses of action seems the more  reasonable and economical.

We have undeniably found some evidence suggestive of an atmospheric-optical explanation. In general “atmospheric-optical” means some effects on the propagation of light either by airborne particles (haze, mist or ice crystals) or by refractive index anomalies (unusual temperature gradients, causing mirage).
Unusual ice-halo effects are ruled out by the absence of ice in the line of sight. But there was a haze layer below the aircraft, probably associated with a weak temperature inversion in the CI area. That inversion would be the remnant of a much stronger advection inversion near the Breton coast, beyond the normal horizon, which was probably strong enough to form a localised optical duct.
…we have tried our hardest to explain the observations but none of the theories we have explored sits comfortably with all significant features reported.
An unusual mock-mirage of brilliant sun-glitter reflections from the sea near the French coast was considered, and might be worth the cost of discounting Capt Patterson’s sighting were it not for Capt Bowyer’s explicit description of lateral image motions. This feature is effectively impossible for mirage; even so, we put the theory in the category of “barely plausible” to acknowledge its other attractions.
We score two other theories as “somewhat plausible” because they seem to have potential to explain the lateral apparent motion as well as at least some, perhaps a majority, of the other significant features. These are:
* Secondary scattering, by a haze layer, of specular sunray reflections from greenhouse glass on Guernsey
* Earthquake lights
But a potential to explain is not an explanation. It may prove possible for other investigators to adapt these theories and so improve the fit with observation, or further work might thoroughly rule out one or both of them…
Moreover, the complexity of the radar and software environment does mean that, in this case, absence of evidence would not necessarily be sufficient evidence of absence, so it may not be straightforward to exclude other theories solely on this basis.”
So no mile-long spacecraft then, but what we do have is an outstanding benchmark for serious UFO/UAP research. It will be interesting to hear Ray Bowyer’s response to the report and I hope that it will be made public on the web site.

Get the full report here.