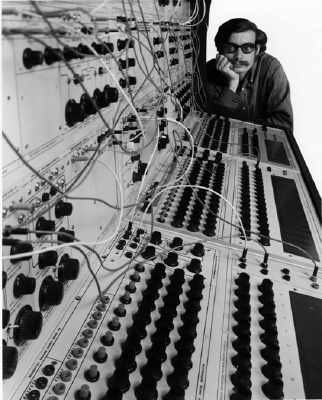 A lengthy and often fascinating interview with electronics genius Don Buchla, who in 1963 developed one of the first synthesiser systems on America’s west coast, just as Robert Moog was developing his own, soon to be more famous system on the east coast. Buchla’s own creations were used by pioneering composers Morton Subotnik (on Silver Apples of the Moon), Ramon Sender and others.

Buchla’s Box, as it was known, became a part of Ken Kesey’s ‘Acid Test’ setup, squawking and skronking away as test subjects lost their minds and found them again, and he has a cameo in Tom Wolfe’s The Electric Kool Aid Acid Test. Meanwhile, to earn a living, Buchla worked on a number of projects for NASA , developing life support systems for rabbits in space, amongst other things.

As well as his own life, Buchla discusses the historical development of electronic musical instruments since the 19th century, and ponders their future.

The interview appears to be under the promotional auspices of a foul-tasting energy drink, but don’t let that put you off – it’s good stuff.