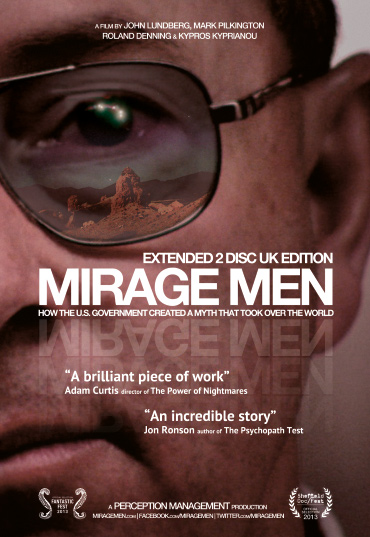 How the US government created a myth that took over the world.

UFOs: weapons of mass deception… For over 60 years teams within the US Air Force and Intelligence services exploited and manipulated beliefs about UFOs and ET visitations as part of their counterintelligence programmes. In doing so they spawned a mythology so powerful that it captivated and warped many brilliant minds, including several of their own.

Now, for the first time, some of those behind these operations, and their victims, speak out, revealing a true story that is part Manchurian Candidate and part Close Encounters of the Third Kind.

This is a special, extended 2-disc version including the full length feature, 8-page booklet with essays by the filmmakers on ‘The Genesis of Mirage Men’, ‘Tricksters, Saucers and Cyber Magicians’, ‘The Enigma of Richard Doty’ and ‘The Unreliable Narrator’, and over an hour of previously unseen additional material, comprising of 22 short films giving background history, extra interviews and an exclusive Urthona music video.

More reviews and info at the Mirage Men web site