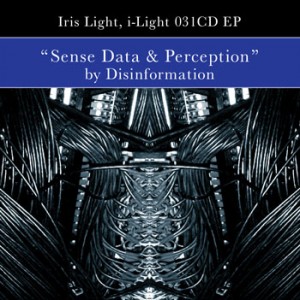 “The poet of noise.”
Hari Kunzru, The Lounge

Through the mid to late 1990s, Disinformation established a formidable reputation in sound art and electronic music, using, primarily, radio noise from live mains electricity, electric and magnetic storms and from the sun etc, to produce a range of powerful and highly-influential sound installations and recordings, often working in a manner closest to wildlife recording. Increasingly operating within the realm of gallery art, and with over a dozen solo exhibitions to date, Disinformation became arguably the UK’s most widely exhibited sound-art project, then, with “Sense Data and Perception”, returned to electronic music, offering intense and dramatic collages of interference and electrical noise. “Sense Data and Perception” quotes the French biologist François Jacob, German expressionist Ludwig Meidner, and Italian former botanist Italo Calvino, to filter perceptions of sound in a way that suggests radio (as a sensory extension that in essence enables people to hear light) as a means of perceiving urban experience (instead of just collecting scientific data and exchanging communications). The emphasis however is not theoretical, but remains focussed on tactile qualities and the drama of the recorded sounds. With the exception of un-mixed magnetic-field recordings made in the London Underground, Disinformation remixes Disinformation – “the city nears, my body crackles, I hear eruptions at the base of my skull”.

“The black-ops unit of the avant garde.”
Paul Clarke, The Metro