Tales From The Embassy 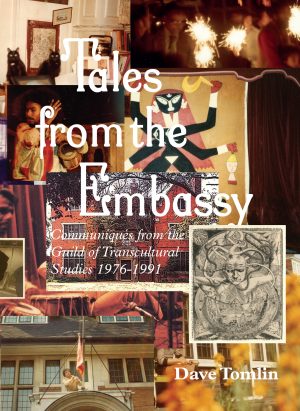 Communiqués From The Guild of Transcultural Studies 1976 – 1991

“If you want a glimpse into one version of alternative London in the 1970s and 80s, here it is… amusing and enchanting in equal measures; a kind of Thousand and One Nights for the counterculture.”
Rupert Loydell, International Times

“A remarkable account… an absolute delight…each [communique´] a vignette of an eccentric and wonderful world.” The Generalist

‘The ideas we discussed in the sixties were not just ideals: many people actually put them into practice. These tales are the best account I’ve ever read of trying to live that life. Written with a wonderfully light touch and yet often dealing with seriously challenging issues, this is a book that probes deep but will also make you laugh out loud.’
Barry Miles

‘Dave Tomlin’s collection of tales gives a vivid picture of the counter-culture of those years at its most engaging. I personally found the tales funny, and often touching.’  Diana Athill

One night in 1976, a group of squatters entered the Cambodian Embassy in London, an opulent building that had remained empty for two years following the bloody revolution of the Khmer Rouge. For the next  fifteen years, this peculiar residence would play host to the Guild of Transcultural Studies, an open platform for creative monomaniacs, radical metaphysicians, poets, prophets and exiles.

Dave Tomlin, founder of the Guild, member of the experimental music ensemble Third Ear Band, and contributor to the legendary underground newspaper International Times, traces a playful, semi-fictionalised, and highly readable path through this long occupation, illustrating the unfettered nature of its many occupants while providing a vivid portrayal of a more leisured age in which eccentricity could  flourish more readily.

Through 220 short narratives, Dave Tomlin sketches many of the wild characters and memorable incidents of these years 1976 to 1991 (with vivid flashbacks to West Africa and the London Free School in Notting Hill in the 1960s). By setting up a ‘Guild of Transcultural Studies’ Dave and his fellow squatters invented an effective aura of respectability that was an object lesson in instant tradition, and enabled them to play host to musicians from Morocco to Pakistan, poets, prophets, exiles and refugees from many countries round the world from Chile to China. The descriptions of periodic encounters with various arms of the diplomatic service, both home-grown and oriental, are often hilarious. Above all, the Embassy provided space for creative monomaniacs and radical metaphysicians to act out their visions. A vivid portrait of a more leisured age which allowed eccentricity to flourish.
Paul Sieveking
About the Author

Artist, writer and musician Dave Tomlin was a founder-member of the seminal free-form folk group Third Ear Band. A constant presence within the London underground scene, he founded the Guild of Transcultural Studies in 1976 and contributed to the International Times.