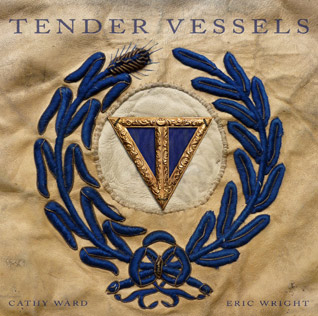 With their honoring of folkloric aesthetic vocabularies, their non-oppositional encompassing of complex, verbally-based literary and philosophical realms and love of shiny things, their history of collaborative social experiment and advocacy for the viability of small-scale group politics (both in their own work and within their communities), and their productive model of sensory-grounded human intellect that recognizes its continuity with the rest of nature, Catharyne Ward and Eric Wright have, in Tender Vessels offered a walk-through manifesto for the future of art, and the components for a makeshift coffin-raft to carry us to the next shore. From the accompanying essay by Doug Harvey

Cathy Ward and Eric Wright met at The Fine Art residency programme at The Banff Centre, Canada in 1989 selected by Canadian artist Greg Curnoe. Their first major collaboration Transromantik begun in 1997, was commissioned by Roger Burton and Ian White for The Chamber of Pop Culture, The Horse Hospital, London, and exhibited in 2000. Further commissions include Volksgeist for Mercer Union, Toronto 2002; Gathering in The May for Standpoint, London 2003 and BeauRoque for Space Micro Gallery, Los Angeles. During a residency at the Center for Land Use Interpretation(CLUI) at the American Land Museum in Wendover, Utah they amassed a body of research partly shown with Grizedale Arts in Romantic Detachment at P.S.1/ MoMA New York, and later a solo exhibition entitled Destiny Manifest- Eden’s End at Café Gallery Projects, London 2005. In 2007 they won Emergency3 the open submission biennale at Aspex, Portsmouth, and Tender Vessels was commissioned as a solo exhibition 2009. They have since been nominated for the 2010-11 and 2011-12 Smithsonian Artist Research Fellowships at The Smithsonian Institution, Washington DC, USA. They are represented in Europe by Armand Hein at Galerie Toxic, Luxembourg. www.ward-wright.com

Cathy Ward was born in Ashford, Kent, England. She was a student of Eduardo Paolozzi in the department of Ceramics & Glass at the Royal College of Art, graduating in 1988. She has mounted numerous solo and independent shows world-wide. Her work has been exhibited at The Drawing Centre, New York; The Jerwood Space Gallery, London; The Whitechapel, London and at John Moore’s Contemporary Painting Prize, The Walker, Liverpool among others. Commissions have included large scale Land Form Sculpture for Gateways to Europe; Monoliths & Dimensions, SUNN 0))); Go Now, Richard Hell; Hey Luciani, The Fall; Last Beat of my Heart, Siouxsie & The Banshees; The Twelve Revelations and Visions, Steven Severin; Ghost Train, Marisa Carnesky; and Murmurations, Urthona and the Asterism. www.catharyneward.com

Eric Wright was born in Mt Gilead, Ohio, United States of America. He graduated from Ohio University – Athens Ohio 1984, afterwards relocating to New York City. Since 1992 has resided in London UK. Eric has exhibited in galleries and museums in the US and Europe including Life/Live at the The Musée d’Art Moderne de La Ville de Paris (with City Racing, curated by Hans Ulrich Obrist); Sociable Realism at The Stephen Friedman Gallery, London and Interesting Painting at City Racing, London. His portraits of country and western stars garnered much acclaim and are found in collections in Europe and Nashville including that of George Jones. www.eric-wright.net