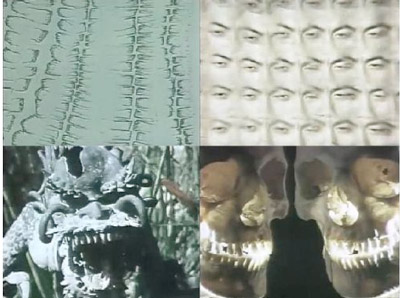 ‘An educational film produced in 1963 by the film department of Swiss pharmaceutical company Sandoz (best known for synthesizing LSD in 1938) in order to demonstrate the hallucinogenic effects of mescaline and hashish. Still it shares many traits with some of the more interesting efforts in avant-garde film making of its time. Maybe the most remarkable about it is that it is the only venture in film of notable French writer and painter Henri Michaux who wrote several accounts of his experiments with drugs. In charge with the filmic translation of Michaux’ prescriptions was director Eric Duvivier (a nephew of Julien Duvivier) whose other films include an adaptation of Max Ernst’s collage novel La femme 100 têtes. Sceptical from the start about the success of such an undertaking Michaux was said to be quite disappointed by the result.’ (text Ombres Blanches)

Now showing at Ubuweb
[note, somebody’s computer screen makes an unwelcome cameo for a couple of minutes half way through, spoiling the otherwise intense mood]