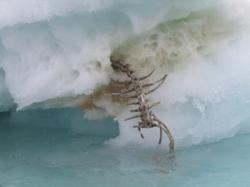 ST. JOHN’S, N.L. (CP) – Marine scientists in Canada and abroad are puzzled by bizarre photographs that appear to show the skeleton of a large mammal jutting out of an iceberg that recently drifted past Newfoundland’s east coast.

The six pictures show what looks like a brown rib cage and spinal column, slightly bent, sticking out of a crust of ice.

But researchers throughout Canada, Greenland and Norway are unable to determine the origin of the skeleton, said Garry Stenson, a marine mammal scientist with the federal Fisheries Department.

“It’s definitely unusual,” Stenson said Monday. “It’s not something that I’ve encountered before.”