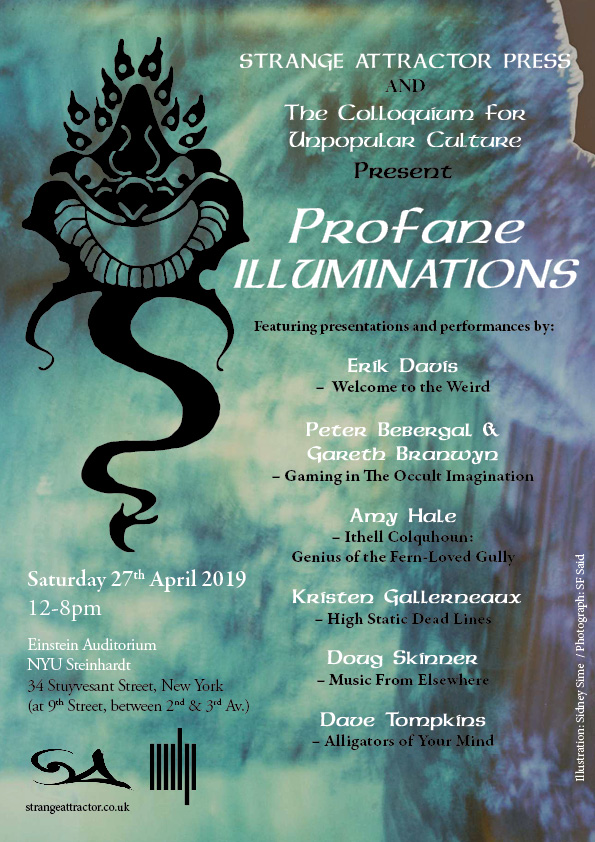 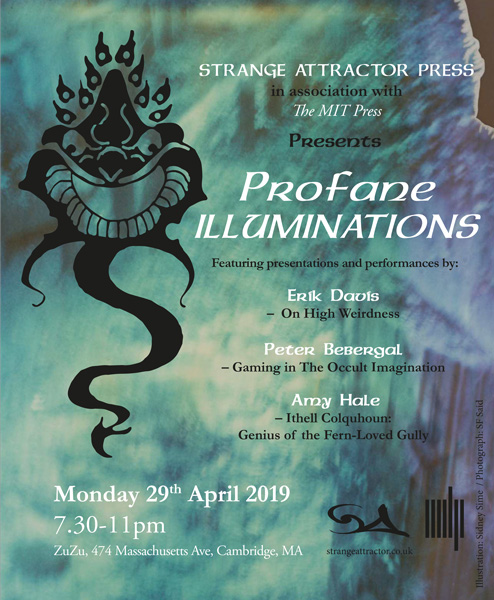 There will be books sales, unique ephemera and author signings at both events.

No booking required.  Join us.

Erik Davis –  Welcome to the Weird

At a time of science-fiction technologies, media meltdown, the pop revival of psychedelics and occulture, and unnerving climate turbulence, we are all experiencing what Philip K. Dick called a “perturbation in the reality field.” To grapple with the growing weirdness of the world, we might start with a better understanding of the weird itself: its origins in oracles and the speculative imagination, and its contemporary expressions through social deviancy, the paranormal, and the “weird physics” of a reality that is stranger than we can suppose.

Erik Davis  is an author, podcaster, award-winning journalist, and independent scholar based in San Francisco. He is the author of the forthcoming book High Weirdness: Drugs, Esoterica, and Visionary Experience in the Seventies, and his work has been translated into nearly a dozen languages He explores the “cultures of consciousness” on his weekly podcast Expanding Mind, and earned his PhD in Religious Studies from Rice University.

Peter and Gareth will discuss their current collaboration, The Path of Enchantment: A Magical Role-playing Game. The two will describe gaming in the occult imagination, the inspirations and ideas behind the game book, and demonstrate some of the operations they are developing for it, including generating Solomonic-like planetary sigils and constructing and conjuring spiritual creatures using traditional role-playing game dice.

Peter Bebergal is the author of Strange Frequencies: The Extraordinary Story of the Technological Quest for the Supernatural and Season of the Witch: How the Occult Saved Rock and Roll, among others. Some of his essays and reviews have appeared in  The Times Literary Supplement, NewYorker.com, Slate, Boing Boing, The Believer, and The Quietus. Bebergal studied religion and culture at Harvard Divinity School. He lives in Cambridge, Massachusetts.

Gareth Branwyn is a well-known writer and editor and a pioneer of both online culture and the “maker movement.” He is the former Editorial Director of Make:, was a contributing editor to Wired for twelve years, and a senior editor of Boing Boing print. He is also the author or co-author of over a dozen books, including The Mosaic Quick Tour (the first book about the Web), The Happy Mutant Handbook: Mischievous Fun for Higher Primates (with the editors of Boing Boing), and the “lazy man’s memoir,” Borg Like Me (& Other Tales of Art, Eros, and Embedded Systems).

Here we will explore just a few of the wild obsessions and magical preoccupations of Ithell Colquhoun, one of Britain’s neglected Surrealists and one of the most dedicated practical occultists of the twentieth century.  This richly illustrated lecture will take us from sex magic to tesseracts, megaliths and tarot cards as extradimensional portals, all in the name of enlightenment.

Dr. Amy Hale is an anthropologist and folklorist specializing in modern Cornwall and contemporary esoteric history and culture. Her writing ranges from modern Druidry to the politics of the British Earth Mysteries movement and the influence of the New Right in Neopaganism. Her biography Ithell Colquhoun: Genius of the Fern-Loved Gully, will be published by SAP in late 2019.

Doug  will discuss and play examples of music that departs from standard practice: tunes attributed to fairies and aliens, music from mediums, occult and alchemical music, musical codes and cryptograms, music from dreams, and more.

Doug Skinner has written music for theater and dance; contributed to Fate,  Fortean Times, Strange Attractor Journal, Cabinet, and other periodicals; his many books include collections of stories, comics, and songs, and translations of Alphonse Allais, Charles Cros, Giovanni Battista Nazari, and other worthies. He is currently working on a book about music for Strange Attractor Press.

Dave Tompkins* – Alligators of Your Mind

In 1967, a part-time medium witnessed an alligator entity hovering in the aisle of a souvenir warehouse in Miami. An acoustic folklore of mud channel bellows and caimantronix.

Dave Tompkins is the author of How to Wreck a Nice Beach: The Vocoder from World War II to Hip-Hop, The Machine Speaks (2011). He writes frequently about hip-hop, film and popular music. His work has appeared in Vibe, The Village Voice, The Paris Review, Wax Poetics, and The Believer. He is currently working on a book about Miami Bass.