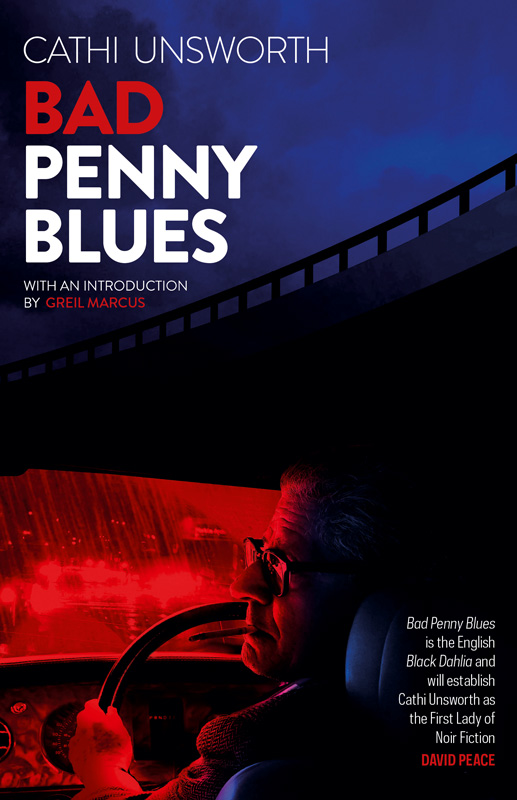 With an introduction by Greil Marcus

“Bad Penny Blues is the English Black Dahlia and will establish Cathi Unsworth as the First Lady of Noir Fiction.” David Peace

“Bad Penny Blues is one of the great London noirs. Its evocation of the demi monde of 1960s Soho and Ladbroke Grove is so grimly and beautifully painted that I find it impossible to walk those streets without the ghosts of Unsworth’s characters whispering to me from darkened doorways.” Mat Osman

“A haunting and utterly absorbing London noir that takes us to all the bright lights and dark places of the big city.” Jake Arnott

London 1959: Police Constable Pete Bradley has done one year in the force and dreams of moving up. His destiny arrives when the body of a young woman is dumped on the banks of the Thames. She’s the first in a series of murders whose naked victims are left in and along the river. Pete’s search for the phantom killer will lead him deep into London’s underbelly as the 1960s start to swing.

Meanwhile Stella Reade, an art student living in bohemian Ladbroke Grove, is woken by terrifying nightmares that echo the last hours of the murdered women – all of whom have been plucked from the streets around her home. Streets where fascists and Teddy boys, migrants and anarchists chase illicit thrills with gangsters and lords.

Bad Penny Blues is inspired by the ‘Jack the Stripper’ case of 1959-65, which sparked the biggest manhunt in Metropolitan Police history but was never solved.

Cathi Unsworth is the author of six pop-cultural noir novels, and the co-author of Defying Gravity, the life and times of punk icon Jordan. As a journalist she has contributed to Fortean Times, The Guardian and Mojo and she has given many talks and walks for The Sohemian Society, The London Fortean Society, The Barbican Centre and The Bishopsgate Institute. She teaches creative fiction for Curtis Brown Creative and Arvon Foundation, and lives and works in Ladbroke Grove, London. For more go to www.cathiunsworth.co.uk