The Moons At Your Door

An Anthology of Strange Tales 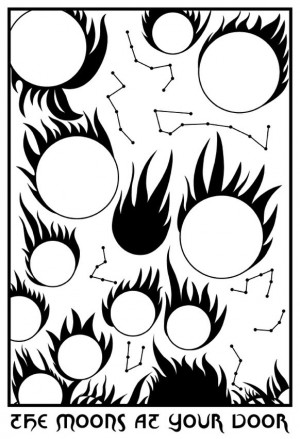 500 signed copies, including an illustrated chapbook edition of Montague Summers’ The Grimoire, and a surprise, available only via Strange Attractor Press

A paperback edition is available now from our webshop and from all good booksellers priced at £15.99

This edition is now sold out, but you can still buy the paperback at all good book shops.
We will be posting copies out from 18 April.

An anthology of strange fiction and hallucinatory tales, The Moons At Your Door collects chilling stories by many innovators of the weird whilst drawing attention to little-known and shamefully underrepresented or forgotten scribes of the macabre.

The Moons At Your Door collects over 30 tales, both familiar and unknown from:

The book’s cover features artwork by David and design by Ania Goszczyńska; the frontispiece also reproduces a painting by David.

About the editor
As founder of the Ultimate Hallucinatory SuperGroup Current 93, David Tibet’s work as an artist and songwriter is widely known. His song cycles present a rich vein of ethereal imagery, arcane reference and the supernatural, creating their own sound-worlds of heart-felt and mysterious poignancy. The Moons At Your Door presents both a skeleton key to these domains and a gateway to the world of supernatural fiction.

David Tibet says about the book:

I fell in Love with The Moons whom I had heard and seen at my door when I was a young boy in Malaysia. I have brought together, in this work, many of the short stories and texts that have made me what I am and what I will be, and it gives an insight into my Spheres for those who wish to read what formed me. I have never tired of these works, which still move me profoundly, and I never will.