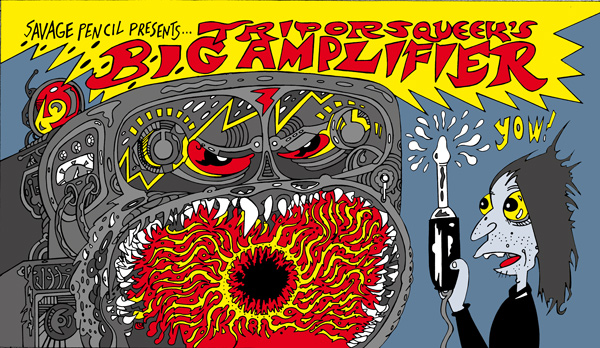 The first 200 copies come with a unique set of postcards featuring Trip Or Squeek designs.

We also offer an edition of 50 signed postcard sets, each of which includes a unique sketch by Savage Pencil.

Herein the true history of music… the heroes and zeroes of the modern music landscape mutated into their true form.
Rough Trade books of the year 2012

Avant Garde music is funny. You know it, I know it, Edwin Pouncey knows it… what we’re here for are the laughs and… there’s a lot of them in this noisy, chaotic, and charming collection. The Quietus

ABOUT THE BOOK
Savage Pencil’s Trip or Squeek strips have been appearing in music magazine The Wire since 2002.

Acerbic, lysergic and razor sharp observations on music, art and life, Trip or Squeek continues a tradition of satirical illustration dating back to the 18th century, albeit one that has been dosed up via the ’60s freak scene, Japanese monster movies and the weird fiction of HP Lovecraft.

Containing over 100 comic strips, collected together for the first time, the book features extensive notes, a discography and never-before-seen preparatory sketches by Savage Pencil, and an illustrated foreword by artist Gary Panter.

ABOUT THE AUTHOR
Savage Pencil (aka Edwin Pouncey)has been writing and illustrating for music newspapers and magazines for almost four decades. His artwork has also appeared on album covers, posters and T shirts for bands including Sonic Youth, The Fall, Sunn 0))) and numerous others.