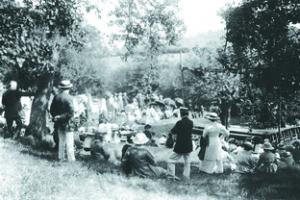 Some very early film shot by antiquarian, photographer and ley line theorist Alfred Watkins is among the archival material going on show next week in Herefordshire.

Volunteer film researchers at the Huntley Film Archives discovered Watkins’ footage of the Hereford May fair in 1910 and soldiers marching off to the Great War in 1914 among a collection of films of rural life in Herefordshire – although we’re not sure if any ley-hunting was captured on camera. The films are being screened around the country as part of a Flicks in the Sticks season about archival film.