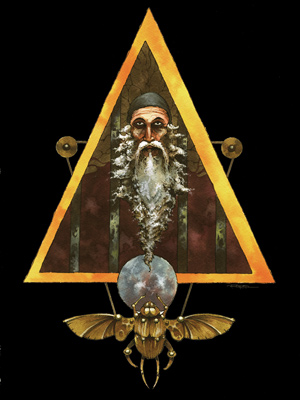 Singer Damon Albarn has written and will appear in a new opera about a 16th Century alchemist, astrologer and spy.

‘Doctor Dee’ will receive its premiere at the Manchester International Festival, which takes place in June and July.

Between the Angels and the Apes features a detailed description of Moore’s intended stage designs, reflected here in the illustration by Arik Roper,  a narrative outline for the opera and several sections of his libretto. It’s a remarkably vivid and illuminating piece of work and it’ll be interesting to see how Damon Albarn’s version holds up to the immense potential of Alan’s original.

You can read Alan Moore’s original vision for Dee, The Opera in SAJ4, available now.