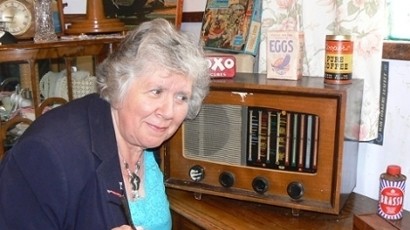 A 70-year-old radio at a Scottish heritage centre has been picking up vintage broadcasts featuring Winston Churchill and the music of Glen Miller.

The Pye valve wireless at Montrose Air Station, a heritage centre that tells the story of the men and women who served there, has no power and is not connected to any source of electricity. The vintage radio set is kept in a recreation of a 1940s room. Several people have heard Second World War era broadcasts including the big band sound of the Glenn Miller orchestra and speeches by Winston Churchill. The broadcasts come on at random and can last for up to half an hour…

Technicians who examined it removed the back, but found “nothing but cobwebs and spiders”.