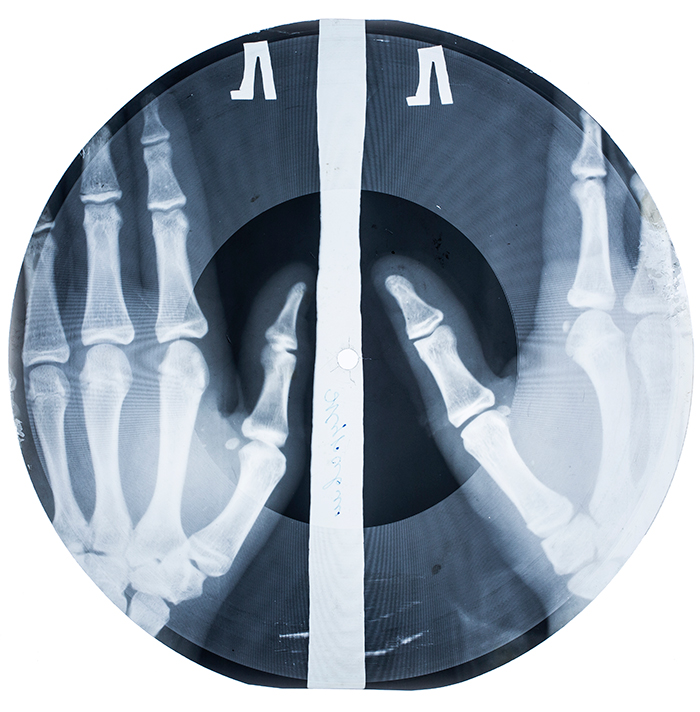 FORBIDDEN SOVIET MUSIC ‘ON THE BONE’

Many older people in Russia remember seeing and hearing strange vinyl flexi-discs when they were young. The discs had partial images of skeletons on them and were called ‘Bones’ or ‘Ribs’.

In the post war period, both the Soviet recording industry and its permissable musical repertoire were ruthlessly controlled by the State. But a vibrant, secret and risky trade grew up in bootleg records containing forbidden music. These were made on used X-Rays obtained from hospitals, cut into discs and engraved with the grooves of copied gramophone records.

Stephen will present ‘X-Ray Audio’, an Arts Council England sponsored project and 2015 publication by Strange Attractor Press, which will illustrate this incredible tale through photographs, essays, sound and film with testimonies from surviving Russians of the period.

Sound artist and researcher ALEKS KOLKOWSKI will be providing a live demonstration of recording onto X-Ray plates using vintage analogue record-cutting lathes and a commentary on groove-based recording techniques.